Top Tips For Online Visibility in a National or Global Market

Moz (previously known as SEOMOZ) have just sent out the summary of what seems to be scratching Google’s itch when it comes to the ranking factors that help you show up in organic searches.  What has this got to do with a Cumbrian business you might wonder?  Well for any business that’s looking to break out of the limitations of Cumbrian cashflow, there is some good solid evidence here, about what exactly will help you succeed online in the wider world.

There is a lot of noise about which eMarketing strategy is best.  Unfortunately a lot of that noise is ill informed with advisers retreating into various camps – myself included in all truth.  I tend to start with the bare bones SEO approach while others start from the social media perspective.  Often we fail to connect the 3 pillars of online marketing: namely SEO, social media AND web design.

MOZ have yet again carried out a huge analysis of search results allied with a survey of dozens of highly experienced online marketing practitioners.  The sample covered the top 50 results for over 14k keywords / search phrases.  The statistical analysis of the search data has thrown up some surprising correlations between some ranking factors and high placements that were a little surprising following the various Penguin and Panda updates.  I should point out (as MOZ are at pains to do) that not all the correlations are necessarily because of a causal connection.  Even these whizz kids aren’t sure why some factors still seem to tie in with high rankings in search.

The summary of the results is worth taking a quick look at before we look at some of the details they turned up.

The MOZ Ranking Factors Takeaways for 2013

Google ranking factors pie chart as the Mozzers see it 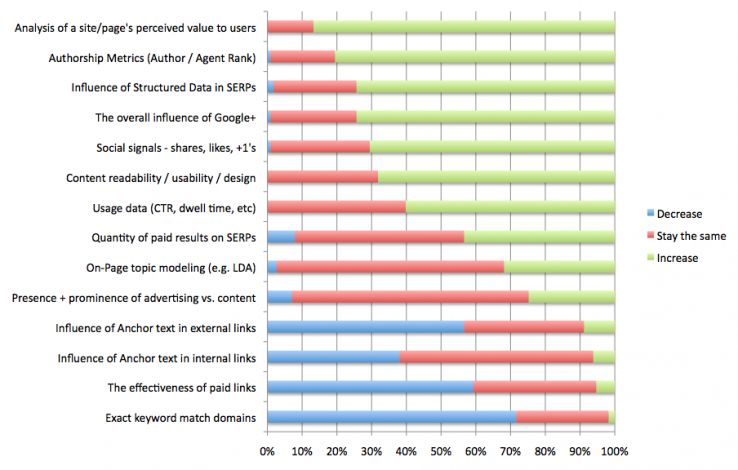 Graphic showing the spread of opinion about key ranking metrics from the SEO / Marketing respondents to the MOZ survey as they look to the future. There are some key differences between the opinions of these respondents and the correlations thrown up by the data mining part of the study when it comes to the importance of social signals.  Many SEO professionals seem to be downplaying the importance of the perceived value of social media chatter, while the correlation data seems to be telling another story.  Google + not surprisingly seems to factor strongly in a page’s ability to rank in front of your target audience.  Much as Keith McMean and Jenny Braithwaite are preaching across Cumbria.  So where is the truth in this apparent mismatch?

What seems to be going on is that social media posts carrying links to a website are giving the target page a boost, especially from Google + which generates DoFollow links that allow PageRank to flow.  So it seems to be less about making a noise in social and more about attracting or earning links from good accounts on those trusted social media domains such as Faceache, Twitface and Gorilla Plus… it’s down to the backlinks again- which ties up closely with the search results analysis.

Interestingly then,  the 2 most powerful factors for getting ranked in search results still seem to be:

The full article is available at http://moz.com/blog/ranking-factors-2013 and I do suggest you go have a read – a couple of times as this is interesting stuff if you value your place in organic search results.

Like most things in online marketing however, the evolution continues.  It looks like Google may be squeezing the organic results down the page as it tries to recapture the momentum of its old Adwords glory days.  Don’t be surprised if we are almost forced into using paid search ads in the next year or so!  The one thing you can say about MOZ ranking factors is that even they haven’t got inside knowledge of Google’s algorithm and SEOs like me will constantly be adapting and responding to the gorilla’s changes.